Moments like these are rare – even for the most accomplished. I must admit: I read through the brochure cover-to-cover!

What are you currently considering that would force you to become a better version of yourself in order to accomplish? Read this post and DO IT!

So this wasn’t at all how I envisioned signing up for my first IM. I was asked by a colleague about doing a triathlon in Couer d’Alene next year-2013, so I checked it out and it was only a 6.5hr drive from our place and I could of sworn I saw on the web a 70.3 option. So I thought- that will definitely be a challenge for me, I have only done an Olympic distance and the swim in that one was hard enough-so I knew 70.3 would be tough for me.  I just had a friend do a 70.3 and I was very inspired. So I agree and say, ya we will go, Warren and I. Then I go to sign up and realize there isn’t a 70.3 option at all-I can’t find it anywhere. I email Wes and say, “ya know I only intended on doing the half…

Riding in his sweet, paid-for Mercedes, I remember thinking Uncle Vic had figured something out.

He would buy really good cars in the middle of their life at a low price (less than what it was worth) – he would target about $20K.  When he’d enjoyed the best these cars had to offer – about 12-18 months – he would sell it for at least what he’d paid, often more, and buy another newer one.

The key seemed to be getting that first one.  This was over 12 years ago, but I distinctly recall buying in to this philosophy, hoping to someday actually do it.

At the time, I had been leasing for my entire adult life. New cars were kinda cool, but with my travel schedule, I was getting killed on mileage charges when I turned them in.  Most often, the dealer would “help me out” by rolling any overages into my new lease.

Yeah, it kinda felt like being on the hamster wheel.

Fast forward to 2011: I finally broke down and read Dave Ramsey’s Total Money Makeover.  Beyond ripping the concept of “fleecing” cars (we all get fleeced when we lease), Dave recommends creating a sinking fund for a car and paying cash.

So, Kristy and I saved for 11 months; in December, we finally had $3000 saved, with hopes of buying a car valued a little higher.  When I checked Craig’s List on 12/28, hundreds of cars were listed in the $3-5000 range within 30 miles of us here in South Jersey.  I narrowed my list: I had been driving my friend’s standard ’97 BMW 328i this past year (on loan), and really wanted something similar. Dozens of BMWs were listed, starting mid-to-late 90s.  After wasting one afternoon of test-driving cars that had few details or pictures, I decided to be more judicious about my legwork.

One simple email to an advertiser yielded a solid lead: a BMW salesperson was selling their ’95 530i; it had only 91K miles and had been serviced the past 4 years at the dealership.  The pictures looked great; standard transmission (sweet & rare); V8 meant the POWER was there.

She rightly listed an asking price of $5000.

I’m not the negotiator that I intend to be…someday. But it’s easy to negotiate when you have a hard ceiling: all we had was $3000 cash.  I asked if she’d consider that price, knowing we would care for her baby; she said she would if we threw some prayers in on the deal.

After googling our seller’s name to make sure she was legit, we drove to Delaware (45 minutes away) and arrived a little early at the meeting place – there was a nasty, rusted late-80s BMW in the parking lot, and Kristy’s heart sank.  Fortunately, that wasn’t it.

This was parked across from it: 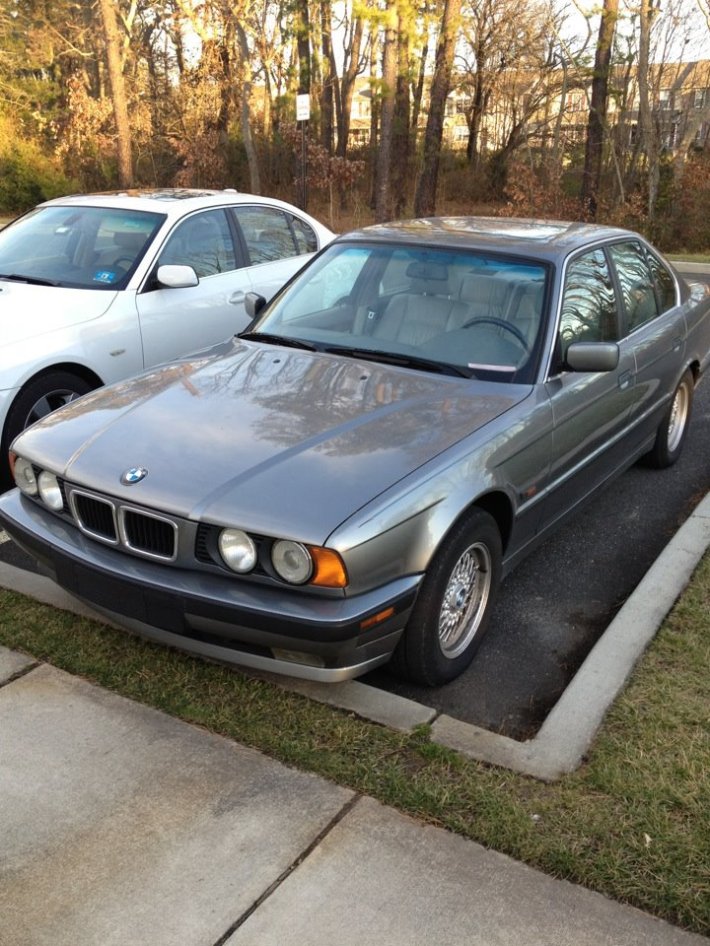 We gave her the money after she started it up without even driving it.  Turns out the seller had also google’d me: her pre-printed Bill of Sale had my correct address on it.  Life in the Web 2.0 age…

I’ve bought cars before, but nothing compares to the satisfaction derived from this experience: delayed gratification, culminating in a value-added purchase that serves our bigger financial goals.